Travel options into the city centre include: 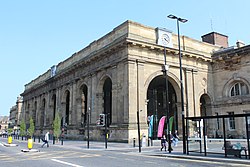 The local rail network is operated by Northern Rail, with relatively frequent services to destinations such as Carlisle, Middlesbrough, Hexham and Morpeth.

Newcastle Central Station is also served by the Tyne and Wear Metro system, for frequent services into the Newcastle suburbs, and other destinations in Tyne and Wear.

In the UK, tickets can be bought on the day at the station using cash or debit/credit card, but long-distance tickets are cheaper to book in advance. Times and fares information is available from National Rail, +44 8457 484950, or the station booking office.

Newcastle upon Tyne is well signposted from the north, south and west. The city lies at the joining of the A1 (the main East Coast route from London to Edinburgh) and the A69 (a major east-west route to Carlisle and the M6). The A1 bypasses the city to the west.

North Shields, 7 miles east of the city centre, has a daily ferry service to Amsterdam in Holland. Special buses run from the Central Station to the ferry terminal and are charged at £3.50 (one way). Much cheaper are local stopping buses to the Royal Quays shopping outlet down the road or the Metro (15-min walk to Meadow Well station).

Taxis are available from outside the Ferry Terminal operated by BlueLine Taxis and EastCoast Taxis. A taxi from the Terminal direct into Newcastle city centre is £11.50 for up to 4 passengers.

The above information actually from Wikivoyage, for more details, please visit https://en.wikivoyage.org/wiki/Newcastle_upon_Tyne